I’ve been talking a lot about minimalism lately, and I realize it can be a pretty intimidating term.

While a minimalist might pride herself on how she’s un-fancy and un-busy, the commitment can feel like a judgment on how others live. Somehow, that concept of “living with less” can really make others feel inadequate. Instead of I have too little, they might feel the opposite: I have too much.

The truth is, minimalism is quite broad and should be a space where almost everyone can feel at home. It’s one of those “truths” with a lower-case “t”: to be used and altered and reconstructed in order to fit the individual’s needs. Think pragmatism. 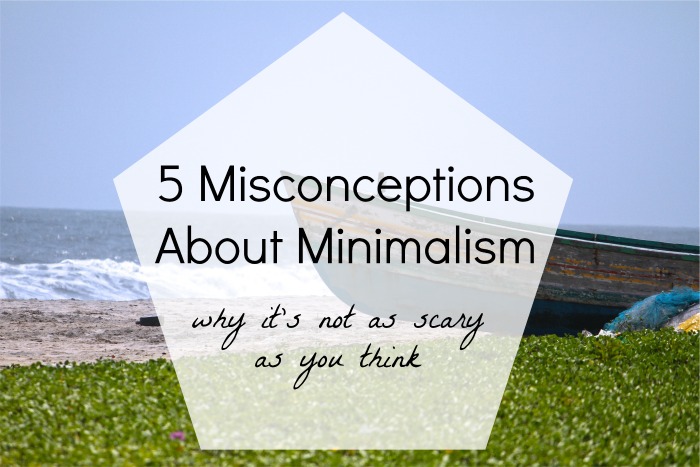 As I myself explore minimalism, I realize that it is more like a tool for reaching something great rather than an end in itself. The purpose of minimalism– whether in our closet, our schedule, our home or our heart– is to help us reach for those things that truly matter to us. The capital-T Truths.

So, if you’re wondering whether minimalism means you have to move into a 200-square-foot home, or sell your electronics, or pare down to one pair of shoes, then this is for you.

Minimalism is the intentional promotion of the things we most value and the removal of everything that distracts us from it. (via)

And then there’s what it’s not.

It’s not legalism. Minimalism doesn’t really have rules. It doesn’t say “do this, then do that”– and it doesn’t limit itself to issues of finance, ownership and possession. It can be as far-reaching or as narrow as necessary. There’s not a certain look to minimalism– a lack of decor, adornment, or aesthetic taste. It’s not a philosophy against all things pleasurable.

It’s not a number. It’s easy for us to think about things in numbers. For example, I pared down my closet to 40 items over the course of 90 days. However, the numbers themselves don’t really matter; the point is that I pared down. Numbers can help us think about minimalism in a concrete way, but they’re not the ultimate goal.

It’s not a virtue. I think it can be easy for minimalists to think they’re better people. Trust me, we’re not. Instead, we’re people who know how easy it is to get side-tracked. We know how distractible we are. So minimalism helps us draw boundaries with our stuff so that we can increase our commitment to the things that matter to us most.

It’s not an end goal. As I wrote above, minimalism is a tool– not Nirvana. It ought to be used to make our lives better, not harder. That’s why I don’t think of things such as capsule wardrobes or capsule kitchens as challenges to compete in. We need to make minimalism work for us, and only WE can define what that means.

It’s not voluntary “poverty”. Minimalism is not asceticism. It is not about fasting away desires in order to achieve a higher spiritual sensitivity. True minimalism is not under the delusion that it’s an experiment in suffering. It’s not refusing to ever make a purchase, to never give gifts or to never enjoy life.

So if you’re looking for more simplicity in your life, don’t be intimidated by minimalism or minimalists. It’s just a tool, and they’re just people. Live for what you love. There’s no other way.

Are You Ready For Minimalism? 5 Ways To Tell.
Celebrity Gossip: Why I Don't Keep Up
Why Thanksgiving Gets So Little Marketing (and it's the best thing ever)
5 Mindset Changes That Limit Unnecessary Shopping