The Royal Alcazar in Seville, Spain 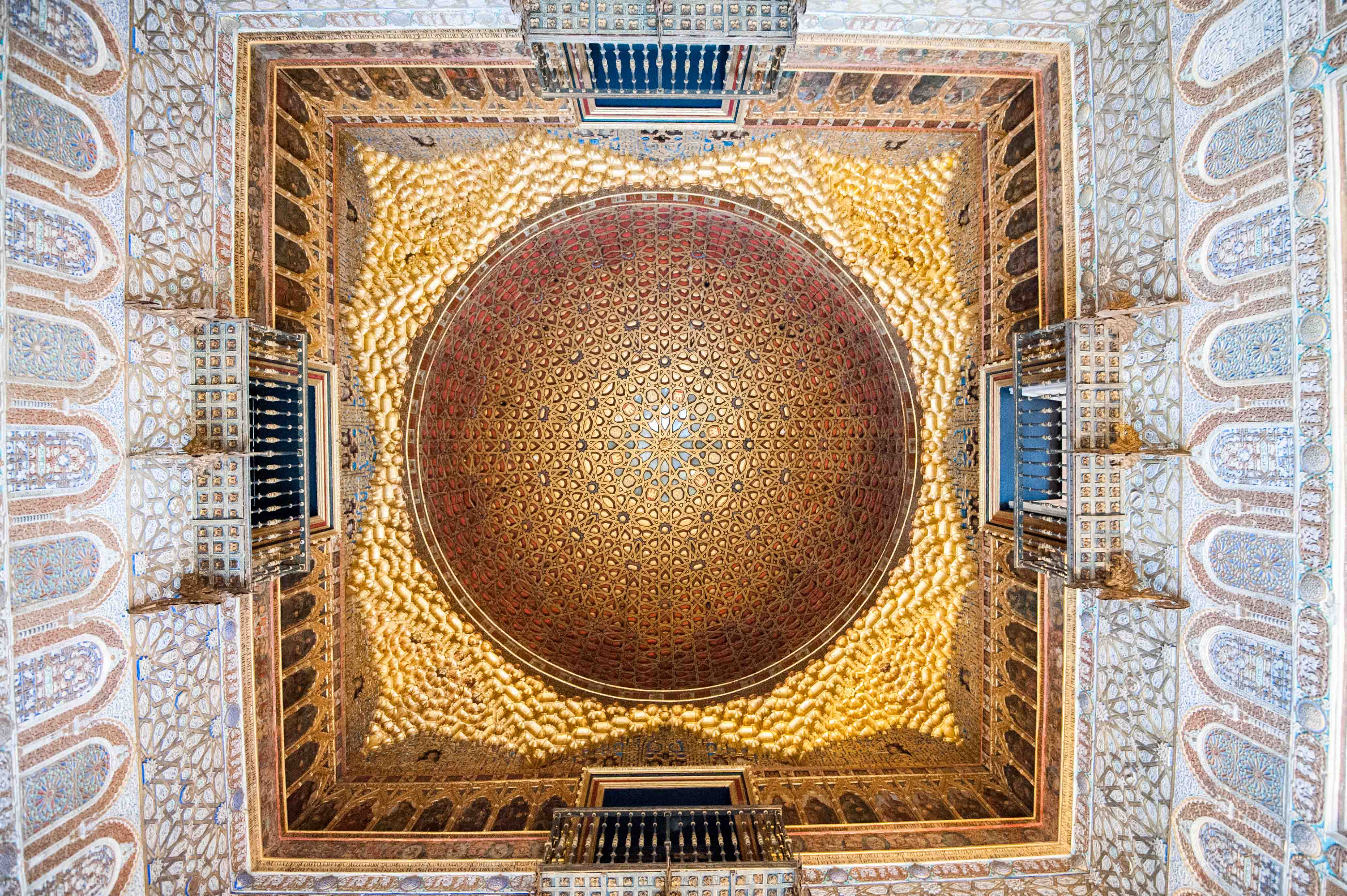 Oh, the south of Spain. Romantic, vibrant, charming and irresistible. Where does one begin? It’s a fascinating part of the world that integrates European, Islamic and Mediterranean cultures all at once.

Our foray into this amazing corner of the world only lasted four days, but we packed a lot in. One of my favorite stops was the Royal Alcazar (Reales Alcázares de Sevilla). It had all the magic of Moorish architecture and Islamic art, but was so much calmer than the Alhambra in Granada. Every square inch of the Alcazar has been beautifully restored; it drips with detail upon detail unlike anything I’ve seen before.

The Royal Alcazar in Seville is one of the most stunning sites in the charming southern city, and it’s not to be missed. Built in the 11th century by the Moors, the Alcazar boasts columns, arches and walls that are intricately carved and decorated. Because Islamic art never portrays actual people and animals, the ceilings are filled with patterns that look like leaves, flowers and stars.

Upon entering through the gate (Puerta del León), tickets can be purchased. They are not cheap, and if you have a student ID, then use it! You’ll be given a detailed map of the palace.

Built to intimidate… and delight

The facade of the palace is as overwhelming as it looks. Thanks to Aaron’s wide-angle lens, we’re able to appreciate its prominence in this photo! No corner is spared of intricacy and the patterns are so inventive. Ahh!

Once you’re inside the palace, it’s amazing just how large it is. There are so many rooms and indoor-outdoor spaces– bring a sweater if you’re there in the winter– plus a huge garden that covers a good number of blocks in Seville.

The Moors were worldly people. They loved travel and exploration, so many of the materials were sourced from all over the Mediterranean. Just try to count how many different types of stone you see!

The Moors believed that mathematics were a route to draw closer to the divine– and many fractals abound in the Alcazar! We visited a mosaic workshop in Fes, Morocco, and saw how every corner of every tile in the mosaic is oh-so-carefully chipped into shape. Then they are all delicately laid to a perfect fit.

And a brief note on the symmetry of Moorish architecture: it kicked my photography butt! It’s so difficult to get a perfectly framed photograph when there are people, lights, and modern features all around. But here’s what I learned early in our trip: when you photograph something that is perfectly symmetrical, it has to be symmetrical in the frame. If it’s not, it will be so painfully obvious. *wiping sweat off forehead*

The Moors were fans of cooler colors, and many of the carved ceilings still retain a little bit of the glorious blue that once was. I just couldn’t figure out how they got their carpenters up to those high vaults to carve such stunning designs.

It was almost too beautiful for me to remember to put down my camera and simply stand in awe. As we climbed up to the second level, there was more to behold. There’s an entire room filled with huge, detailed rugs hung on the walls– and they have maps on them!

From upstairs, there’s a breathtaking view of the endless gardens below. Romantic balconies and terraces allow for a little reflection and respite before forging on in this beautiful property.

And finally, the garden itself… what a marvel. The water features are quite common (in fact, some are right in the marble floors of the palace so don’t fall in), as the Moors felt it important to integrate flowing water into their homes. I’m not complaining– it’s really cool!

Tips for your Alcazar visit

The Alcazar (website) is pretty self-explanatory. There are no timing restraints, but sometimes you have to wait in (a long) line to enter. In my brief experience, mornings are usually less busy than afternoons.

The Alcazar is located in Seville’s downtown area– right next to the Seville Cathedral. Be sure to give yourself time to wander around this area (if you’re not staying here) before or after your Alcazar visit. I would recommend about 2 hours for the visit; more if you’d like to take lots of photographs without people in them!

How To Actually Save Money For Travel
How to travel from home: a guide to creating experiences that inspire
Yosemite National Park: A Quick Guide
7 Ways to Spend More Time Outdoors