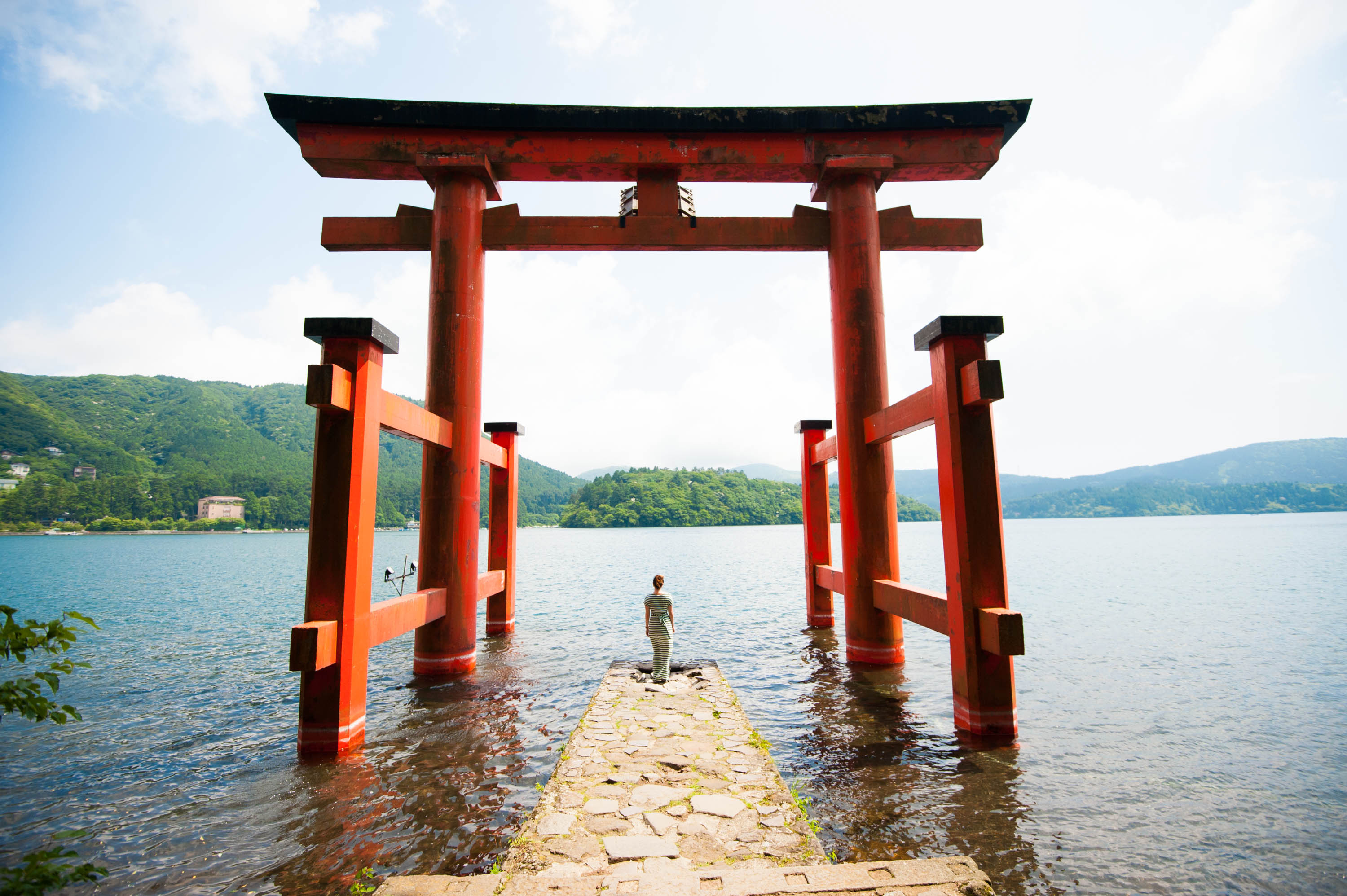 As I sift through our Japan photos, I have to ask myself: is there any place more photogenic than this?

So I decided to select only 10 snapshots that come with a good story or memory from our time in Japan. After reading this I hope you’ll feel compelled to visit one day! And if you have not read my other Japan-related posts, you can find them here.

If you’re asking yourself, “Should I go to Japan?”, take a look at these photos and you tell me! 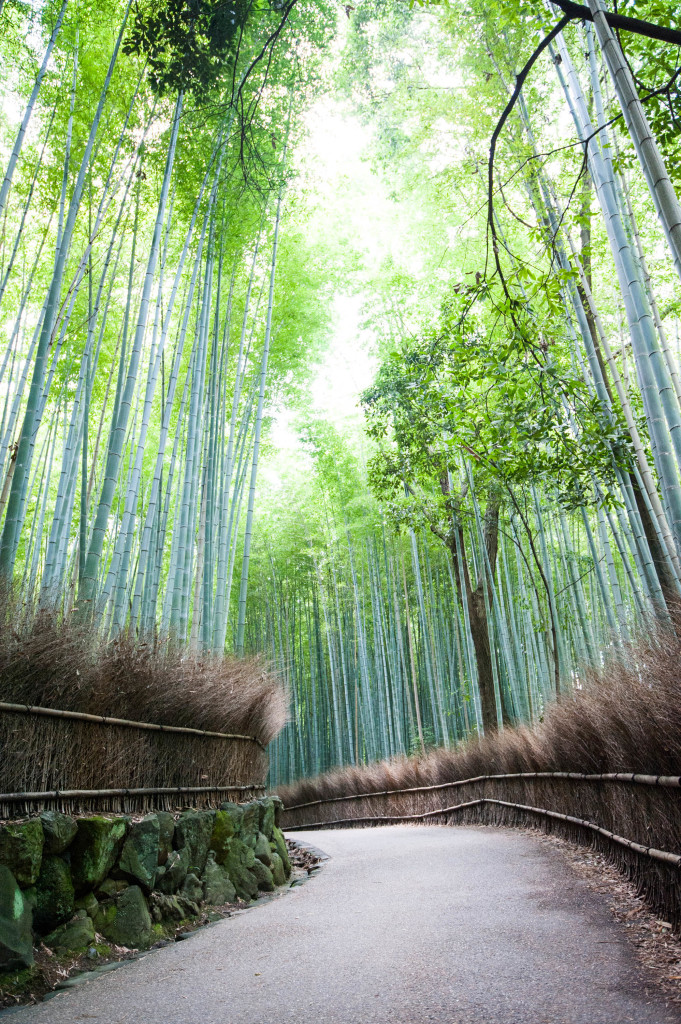 This bamboo forest was the bane of my existence for about 24 hours. We just could not find it! There’s an entrance to the forest that many people go to, and it looks kind of like this– except there are other trees and tons of electricity lines everywhere. We thought that was it… and that the famous bamboo forest had been totally overhyped. One early morning Aaron and I went to that beginning section of the forest, looking for it. We then searched in the wrong direction and found ourselves in a quiet residential neighborhood, disappointed. It was not until the 3rd time we looked for the forest that we wound up in the right place– here! It’s not overhyped after all! 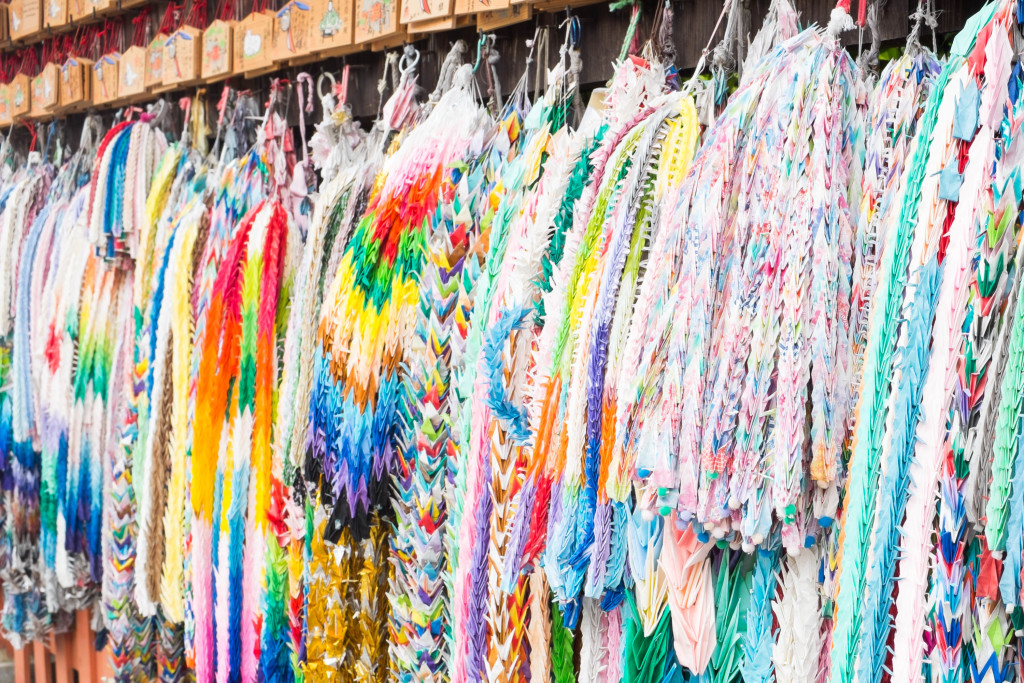 These chains of paper cranes were spotted outside Fushimi Inari Shrine. I loved their vibrant colors! Cranes can be made and given for a number of reasons– a friend gave us each a small crane in hopes of a good visit in Kyoto, for example. Don’t you just love the paper? 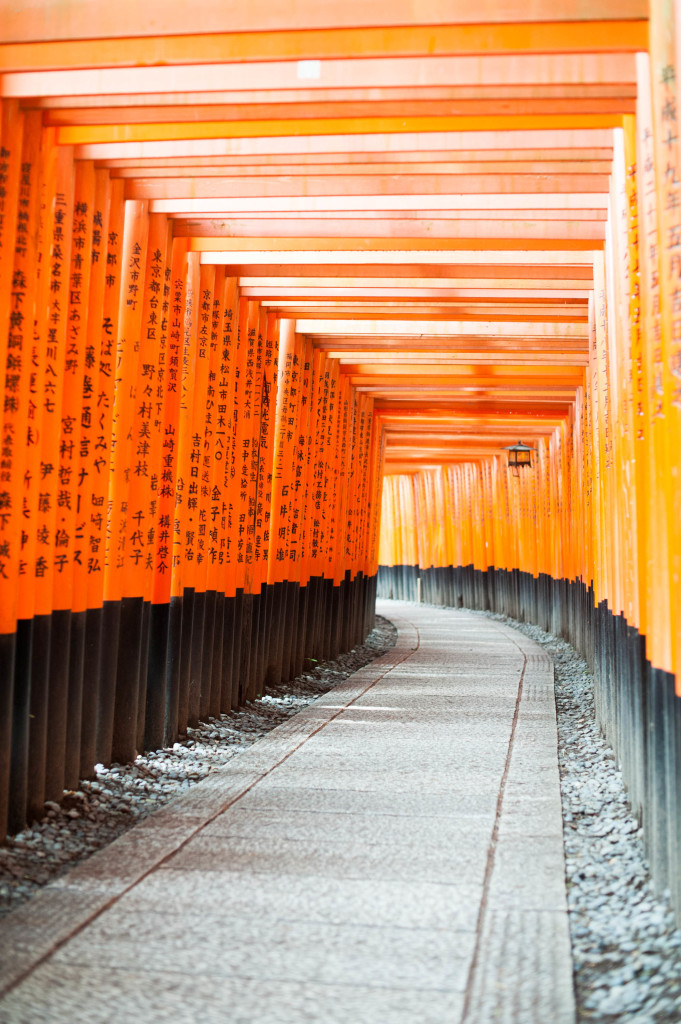 Fushimi Inari is famous for its long, winding tunnels of bright orange torii gates. These gates, according to Shintoism, purify those who walk through. Companies are invited to donate a torii gate to the shrine, thus the numerous gates lined up all along the mountainside. One gate costs about $10k, but of course the more you donate, the bigger your gate.

The greatest thing about Fushimi Inari was that most tourists don’t make it very far in. So, by just walking a bit further, we were able to get snapshots like this one without anyone in them! 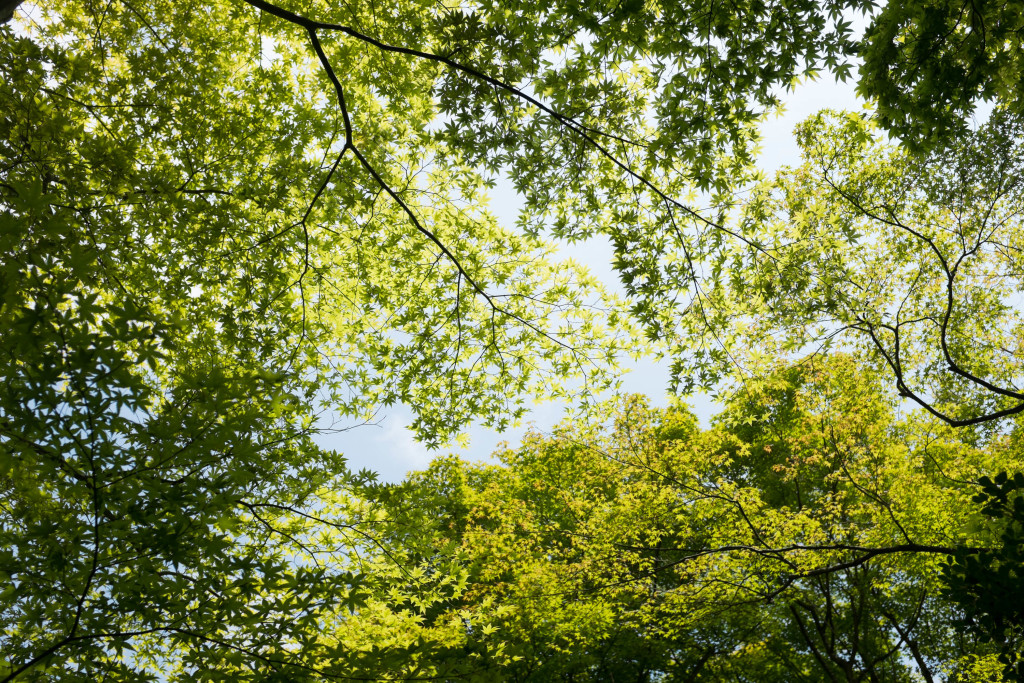 I loved seeing large maple trees whose pointed leaves filled the sky with “stars.” Maples are everywhere in Japan, but especially in gardens. These were seen at the Okochi Sansho Villa in Arashiyama, Kyoto. I can’t imagine how lovely the gardens are in the fall when all the leaves turn golden and crimson. Oh, to come back and see it! 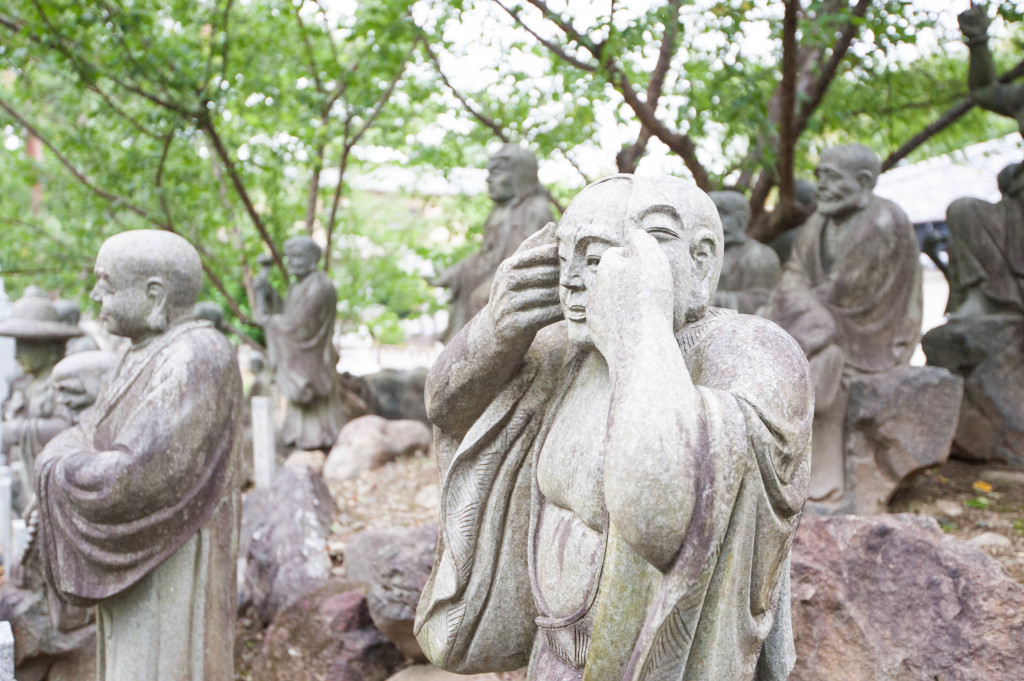 We happened upon this garden of monk statues on an early morning walk in Kyoto. Some of them were cheerful and others serene, but this guy was a bit creepy. He appears to be peeling off his face– any interpretations? My somewhat mild reading of this is that behind his stern expression is pure joy. Why he’s hiding it, I have no idea.

It was fascinating to learn more about Japan’s religious inheritance, though I can hardly claim to know much. One myth that really struck me was that of the founding of Zen. The original Zen master, Bankei, is believed to have concentrated for a long time before achieving enlightenment. In order to further his concentration, he dug out his irises– yikes! 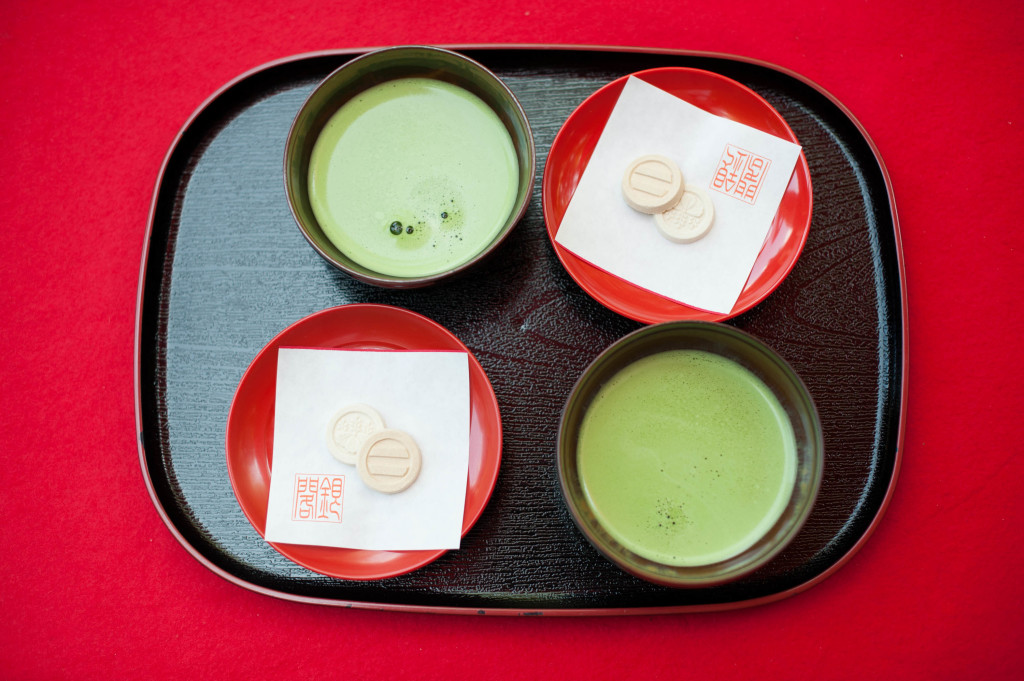 I don’t know how many bowls of matcha green tea we consumed during our trip, but it was such a delight! This high-quality green tea powder is whisked in large bowls (at least 5 inches wide) and enjoyed hot or cold. It has a rich, thick flavor and a lovely foam on top if whisked correctly.

Japan takes tea very seriously; people can actually get an official certificate for whisking matcha. And I can tell you from experience that it is not easy at all; the powder is very fine, so it’s difficult to whip up a lump-free tea. When done right, however, the result is delicious. 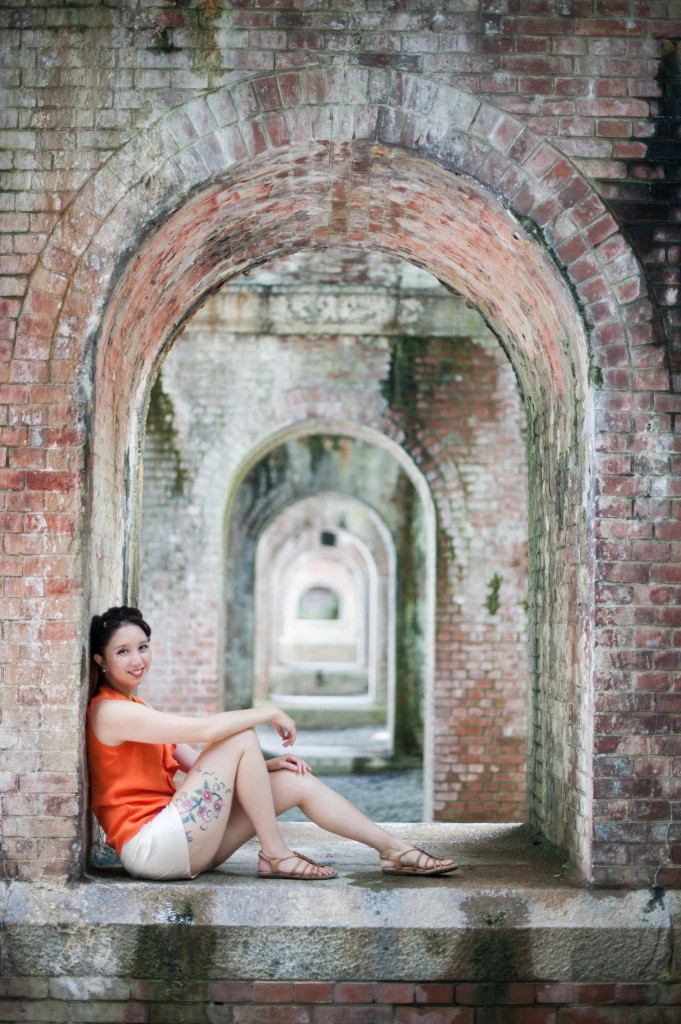 This aqueduct was built in the 19th century to carry water from a natural source. Here I am seated in its sturdy foundation, but we also climbed up to the top to see clear water gushing through its channels. I loved this site because it’s so unexpected: to get to the aqueduct, you walk through the entrance of the Buddhist temple, which is lined with maple trees. It feels so authentically local– until the aqueduct appears. It served as a reminder that while Japan was closed off to the world for a long time, it still adopted some of the West’s best ideas. 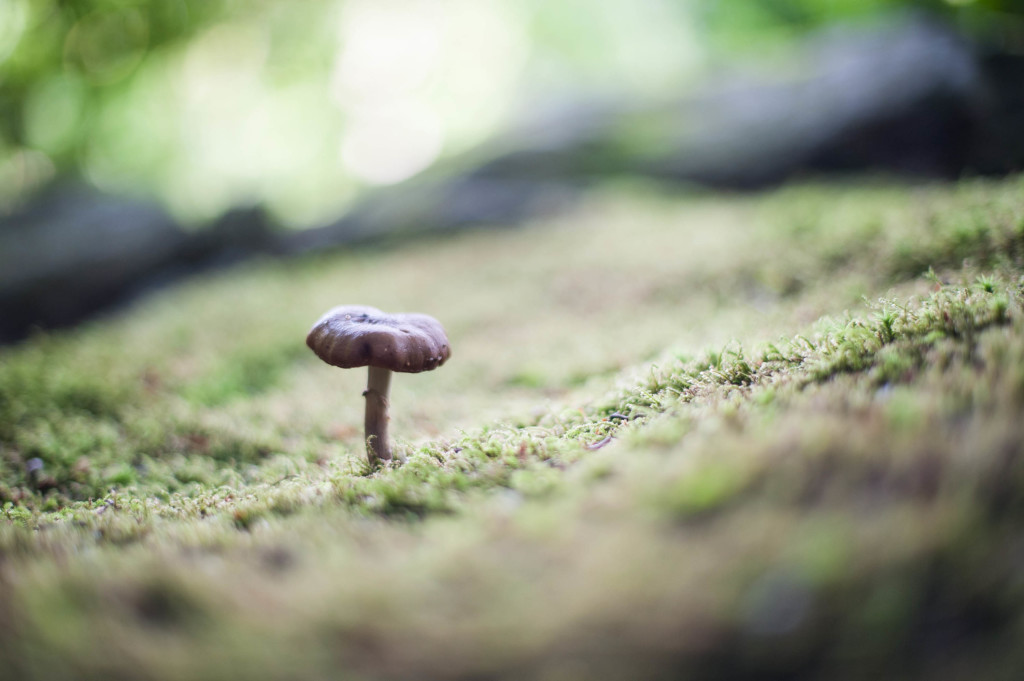 Can you tell I love gardens and temples?! This little mushroom was growing on a large patch of moss– which is actually a type of garden in Japan! Moss is intentionally planted as a natural carpet surrounding tall, beautiful trees. Perhaps I was so drawn to all the greenery because we’re in a drought in California. Plus, nothing terribly green ever grows in Pasadena– at least nothing drought-tolerant. Getting a little break from our succulents was quite what I needed, and these moss gardens were so moist and tranquil! 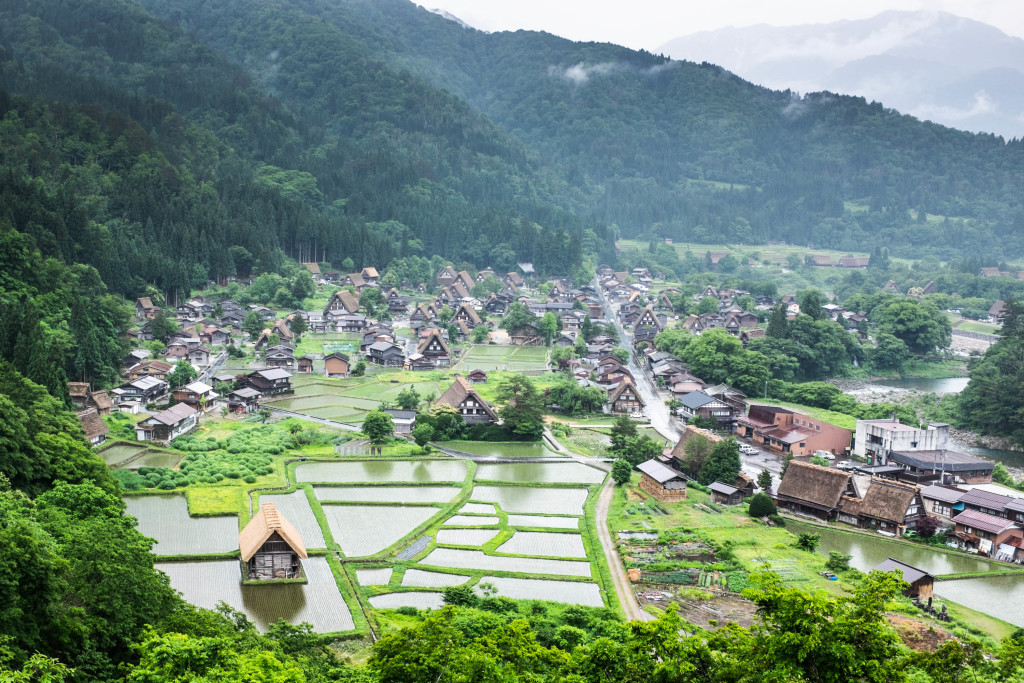 I wrote a post about this incredibly lovely village already (read it here), but I just had to repeat this photo. This is the view of Shirakawago, a heritage site west of Tokyo. The thatched-roof houses were used for raising silk worms, but now the area has been preserved for visitors like me. People still live here, though, and many participate in the annual sake (rice wine) festival. The wine, which is usually clear like water, is served unfiltered so that it looks a bit like milk! I can’t say I loved the stuff though; it tasted a bit like fermented rice porridge, and not in a good way. 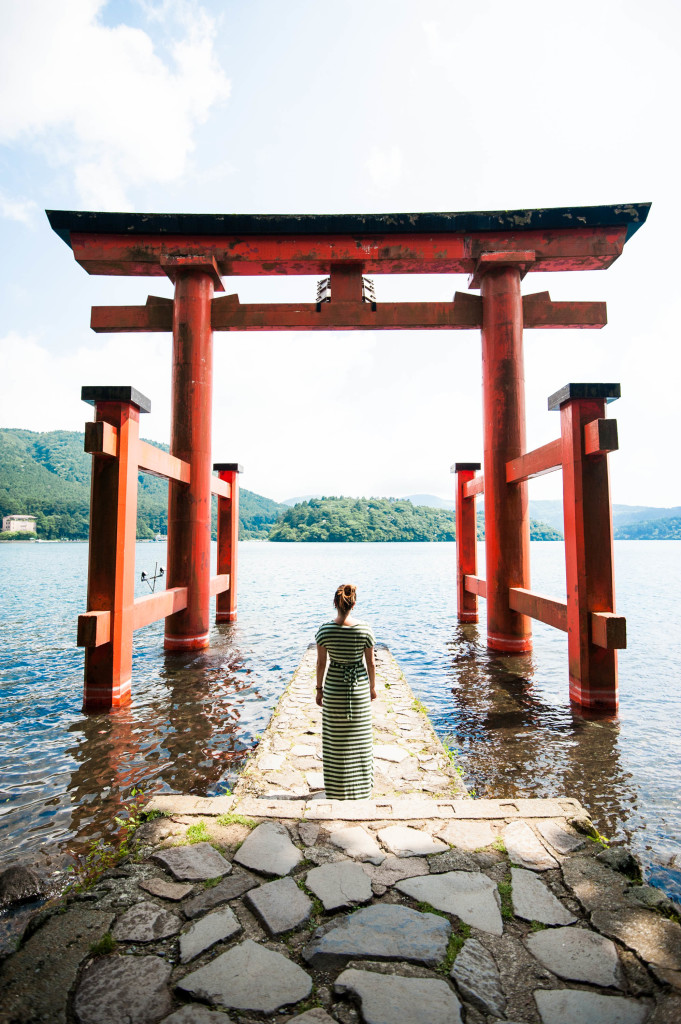 10) Torii gate to the water, Hakone

You can get a sense of scale since I’m standing under this gate, and I was just enamored with it. This torii gate is actually the entrance to a shrine (which would be behind me), but it’s sort of majestic all on its own. Hakone is a region near the volcano Mt. Fuji; many people come to Hakone to enjoy hot springs and a view of the mountain. Unfortunately what adds to the mystique of Fuji is that you can’t always see it (and we did not). People travel from all over Japan and the world to pay homage to the taciturn volcano, but I think Japanese paintings of Fuji are just as lovely.

Sharing is appreciated! Which one is your favorite? 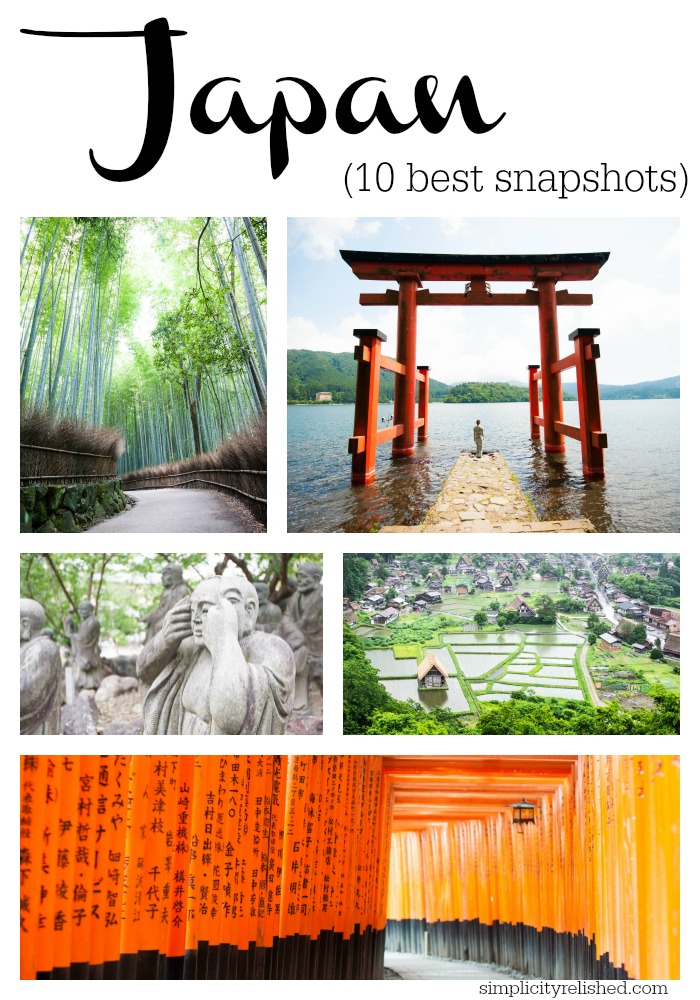 Get your #wanderlust on with these 10 snapshots from Japan! via @daisylinshih

How to visit Banff National Park: Canadian Rockies Travel Guide & Map
10 Highlights On Our Upcoming Japan Itinerary
How to Work from ANYWHERE and Still Be Productive
10 photos that will make you book a flight to Ecuador